Coming home to God in our ministry in Amsterdam 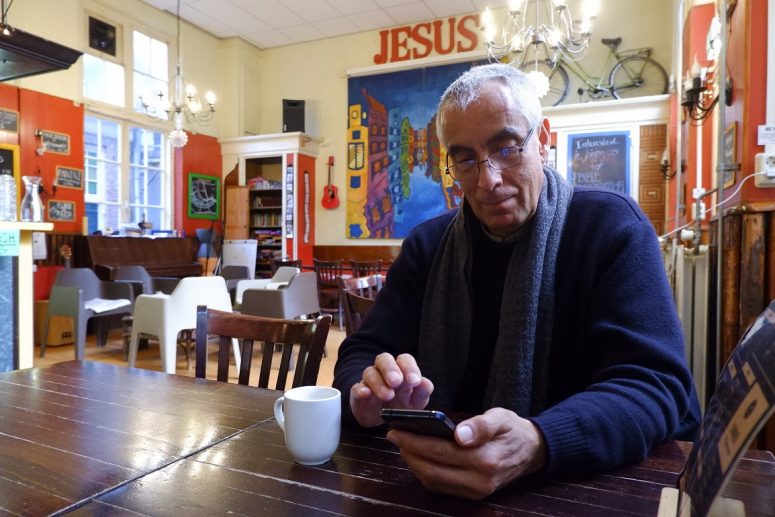 For us, he is a beloved and regular guest. For him, our hostel ministry in Amsterdam is not just an accommodation or workplace: “It feels like home.”

The average stay of guests in the hostels is about two nights. Ronald exceeds that average. For the past two years, he has been staying for three nights every week in both of our hostels. The fifty-eight-year-old man has thought carefully about what he wanted to tell. He also prayed about it. “‘Coming home’ was the word that came up to me in prayer.”

Traveling back and forth

A few years ago, Ronald and his wife found out his mother-in-law had gotten Alzheimer’s. They chose to move to France to take care of her. Ronald, who works in The Hague, travels therefore a lot between France and The Netherlands. During the week he stays in Amsterdam, because he wants to be near Schiphol. He is in France on the weekends. “Fortunately I can work everywhere, so I’m not always tied to a place.

Ronald stayed in different hostels in Amsterdam, before he ended up in the Shelter Jordan. He was attracted by the term ‘Christian Hostel’. “I was raised in a protestant family. My parents were active believers, I would say. I attended a Christian primary school. We read the Bible after dinner, we prayed together and I remember we often talked about faith. That all changed when I was about twelve years old. Through things that happened in our family and societal changes in the seventies, my parents started losing their religion. We stopped going to church. I started studying, working, got married and became a dad. I wouldn’t say that belief in God was completely gone, but I did not do much with it. “

“After some years I started to explore Buddhism.” On his smartphone Ronald shows a picture of Lama Karta (a clergyman in Buddhism). “During that time, this man became important to me. Dharma, literature, is very important in Buddhism. But it is not just about studying: you have to make the things you learn part of your lifestyle.

You notice the difference between someone who only has knowledge and someone who has lived through it. Lama Karta – he died a few years ago – was an authentic man. I got to know him when I followed some retreats with my wife in a Buddhist center in Belgium where he was in charge. I have read a lot and learned a lot from that. But just meditating on the things I read, didn’t get me much further. Meditating on my place in the universe made me feel pretty lonely. There has got to be more to life, I thought.

Coming home in the Shelter

After fifteen years of active involvement in Buddhism, Ronald stayed a night at the Shelter Jordan. “I felt so welcomed and loved when I entered the hostel. I was immediately put at ease. That is what I meant by coming home. First in the Shelter Jordan, later the Shelter City. I started talking with the volunteers about my questions. My doubts. I was very open about my involvement in Buddhism. I had a lot of nice discussions with volunteers and other guests, from all over the world. It was very enriching.”

Ronald participated in many of the hostels’ daily free activities: Bible Meditation, Bible Inspiration, evening prayer, etc. Ronald often heard about the sacrifice that Jesus made for his sins. It made him think. “I was particularly touched by prayers for me. In Buddhism it is often about awakening. I feel like I woke up as a Christian. Here in the Shelter I came back on the path of the Christian faith in which I was raised until I was twelve. And the beauty is: the moment you embrace the faith, you are a child of God. Then you are no longer alone, for He is your Father. In this way I escaped the loneliness of Buddhism. I came home for the second time.”

“I know many Christians are negative about Buddhism. I am still trying to find my way in this. Because Buddhism taught me a lot. About love. About wisdom. I found that in God. Because I’ve found him, I do not feel like searching anymore. The Bible gives me new inspiration.

There is a text on the wall in the Shelter City that says: Jesus loves you. I truly experience that here. I experience God in everything. Also in the many conversations I have had in the Shelter. I am grateful for that and I see something of God in it. In the Shelter City, I participate in the Alpha Course together with some of the cleaning volunteers. I am very thankful that God sent me here, a place to call home away from home.” And we are really thankful to see how God is moving through our ministry in our guests’ lives!